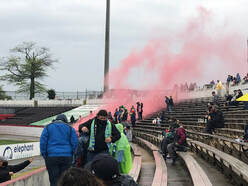 Home openers usually have an upbeat feel.  Tonight was different.  Throw in the cold and wet making it difficult for the allowable sold out crowd to get fully excited.  In fact, by the final 15 minutes of the match, sleet entered City Stadium.  In the end, Kickers fell in the home opener to defending USL1 Champions, Greenville Trimuph SC, 1-0.
Richmond looked as if it would have the advantage going into half as Cesar Murillo took his second yellow card with approximately five minutes remaining in the first half.  Thus, the Kickers had the 11-10 man advantage.  Unfortunatly, they could not capitalize.  The Kickers could only muster 1 shot on goal the entire match and zero while playing with advantage.  To add insult to injury, during the 74th minute, Richmond conceded a man advantage own goal that turned out to be the difference maker when Luke Pavone tried defending a cross and put the ball in the back of his own net.
Something that cannot go unnoticed, a total of 24 fouls were called, handing out 8 yellow cards and one red.
Kickers All Rainbow Cookies After ​Road Win to Open Season 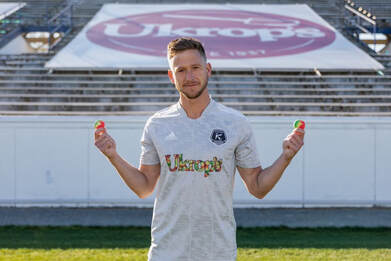 The USL1 season began on a high note on the road for the Richmond Kickers.  The Kickers came hot out of the over, as I apologize for the bad pun, as you see from their away uniforms and their title sponsors, Ukrop's, they embrace the colors of their ever famous Rainbow Cookies!
Johnathan Bolanos opened up the scoring for the season for the Kickers in the 35th minute.  Then, as stoppage time was coming to a close at the end of the first half, the Kickers put in the dagger.  Err, spatula.  Juan Pablo Monticelli scored on a corner as halftime was whistled.
The Revs II controlled possession throughout the match, but Kickers GK was never challenged.  Even though New England controlled the ball 66% of the time, they had a total of zero shots on target.
Closing the road victory in stoppage time, Oalex Anderson flicked his shot over Edwards (GK, Revs II) for the game clinching goal.  The Kickers open up City Stadium next Saturday versus Greenville.
April 5 - I just bought my Kickers+ subscription.  Their home opener is on April 24.  Expect to see me there!  For more information, click here --> Kickers+