2021
ALL TOO FAMILIAR - ORLANDO CITY / NYC END IN A DRAW
For the sixth time and what seems like the 100th consecutive time, Orlando City and New York City FC find themselves deadlocked after another 90 minutes.  The two clubs will still find themselves North of the playoff line by the end of Leg 4, but does not change the end result, frustration or disappointment for either squad.
New York City controlled the majority of the first half and tempo but could not put a ball past the Lions.   Then in the second half, a different mind-set took over for Orlando.  Bringing pace, tempo and a sense of urgency, Orlando City's golden boy, Nani, scored his third goal in as many games in the 52nd minute.  Again, the Portuguese superstar created his third memorable goal of the season.
Coming off the bench to start the second half was Joao Moutinho, replacing an injury Ruan at defensive back.  Why this is brought up, because in the 77th minute, Moutinho stabbed at the ball, tripping the NYCFC attacker, thus giving away a PK.  Valentin Castellanos put the ball in the bottom right corner of the goal to tie the game and scoring his fourth goal in as many games.
Orlando City pushed the attack, but could never put a second goal past Sean Johnson.  Then, in the final seconds, New York City found themselves one on one with Pedro Gallese, where the Octopus had the save of the night to ensure the 1-1 draw.
Orlando City have eight days to figure out their scoring woes.  The Lions travel to DC next Sunday for their next match.  Orlando City has only scored 5 goals in their first 4 games, scoring at 27.8% of their total shots on target.
EARLY GOAL LEADS LIONS TO 3-0 VICTORY 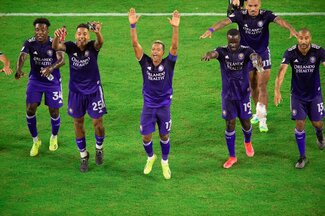 Thirty three seconds.  That’s all it took.  Guys everywhere just got self-conscious, then realized this is in reference to Orlando City SC scoring their first goal of the match in their 3-0 victory over FC Cincinnati.  After a bad back pass by FC Cincinnati’s centerback, Nick Hagguland, Orlando City’s Tesho Akindele found the back of the net just 33 seconds into the start of the match.
Orlando City opened up their season with two straight draws, took advantage of a quick start to help earn the full three points in the standings table.
NANI:    After Week 2’s goal of the week, Nani delivered another shot of the week contender.  This time, starting left, cutting right, then cutting back left to then hit his second goal of the season from the 18.
KYLE SMITH:      With roster members like Nani, Chris Mueller, Ruan and Junior Urso, it is really easy to fly under the radar.  Kyle Smith, though, shined bright.  Proving he is more than just a defender, Smith made valuable runs and attacks up the left side of the pitch throughout the night.  Something special is brewing in that kid!
THE BEAR:          From a cross by Nani headed by Andres Perea back in front of the goal, Junior Urso found himself roaring after the Lions scored their 3rd goal of the night by the use of his right foot.
JOAO MOUTINHO:          Welcome back!  Five months after hip surgery the defenseman made his first appearance in the final few minutes of the game tonight.  His return provides, at minimum, depth.  Still waiting to return is the Viking, Robin Jansson.
UP NEXT:            The Lions next match is next Saturday evening as they host New York City FC.  The Pigeons are on a two game winning streak after tonight’s 2-0 road victory at Philadelphia Union.  This also marks their first meeting since their Round of 16 matchup in last year’s MLS Cup Tournament game. 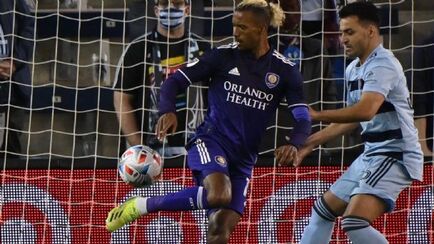 picture courtesy of El Futbolero
NANI HEELS ORLANDO CITY TO DRAW AT SPORTING KC
Questions still remain unanswered for the 2021 season for Orlando City SC, but a beautiful heel-kick by Nani late in the game last night lowered the murmur.  After allowing a stoppage time goal to end the first half after what can only be described as a very bad clear out from the back, Orlando City used an attacking second half to pressure Sporting Kansas City.  Nani's goal came in the 78th minute after Christian Mueller blasted a shot from close range forcing Sporting KC goal-keeper, John Pulskamp, to deflect the shot only; thus allowing Nani's brilliance to take over.
The road draw and first goal of the season gave Orlando City their second point in as many matches to start the 2021 season.  Though looming questions still need answers.  For example:
- With Dike destined for a fulltime gig in England, who will step up and become the next primary striker?
- The backline seems shaky at best.  Will the return of both Robin Jansson and Joao Moutinho help solidify the back four?
Orlando City's next match is next Saturday as the Sun Lions return home to host FC Cincinnati.
SUN LIONS DRAW IN HOME OPENER
Arch rivals Atlanta United helped kick off the season for Orlando City SC.  The two met in the friendly confines of Exploria Stadium.  With the obvious absence of Darryl Dike (who is still in England with Barnsley), his replacement Pato had a good look or two.  In the end, the 5-Stripes pulled off the away draw, nil-nil.
Atlanta United controlled the first 23 minutes of game play.  From there and especially through the entire second half, Orlando City controlled the pace.  The second half, Atlanta United found a difficult time even getting the ball passed midfield.  With that said, each squad only had three shots on target.
Pato's debut was not as memorable as fans (and he) would have hoped, but heavy promise was shown.  Orlando City's next match is next Friday at Sporting Kansas City.