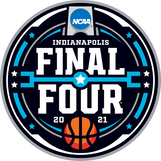 In Most Anticipated Game, Baylor Routes to Championship 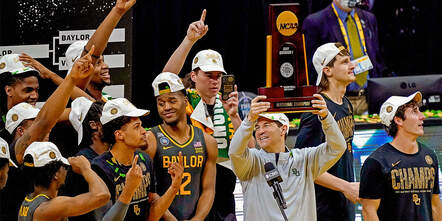 From literally, the opening tip, Baylor took control of the game and dominated their way to the school's first ever Men's Basketball National Championship.  Baylor's 86-70 over previously unbeaten Gonzaga still does not show justice to how dominant the Bears actually were.
Baylor caused 14 turnovers (the majority of which were steals) and more impressively, had 16 offensive rebounds.  If scoring 30 points inside the paint wasn't impressive enough, the Bears added 10 three-pointers to aid the route.
Coming into the season, it was a 2-horse race by most basketball enthusiasts of who would be the nation's best player - Iowa's Luca Garza or Baylor's Jared Butler.  I'm not saying Garza wasn't brilliant for Iowa, because he was, but at the end of the day, Butler scored a game high 22 points and led his team to the national championship.
PREVUOUS CHAMPIONS
Leaderboard:  Through Sweet 16
After the Sweet 16, regardless of how ugly the average person's bracket looks, we do still have a leaderboard.  And more impressively, some still have 3 of their Final Four teams remaining.  Much less, both teams in their Championship Game.  Only two people have the possibility of having all 4 Final 4's advance (Mary Kirwan and Ed Kirwan).  I see a conspiracy theory forming!  Before we start speculating and before the Kirwan family goes shopping, here is the current leaderboard after ALL Sweet 16 matchups:
1. Jason Sipe               6. Bobby Krausse
2. Leslie Maples          7. Zach Turner
3. Cassie Parker           8. Mike Zito
4. Nick Riordan           9. Chris Zablo
5. Chris Borton         10. Keith Costner
Payout will be the following:  1st = 50%; 2nd = 25%; 3rd = 15%; 4th = 10%
If you haven't paid yet, most have (thank you) please do so ASAP!  Venmo = @charlie-krausse
I will pay out the winners realistically Tuesday morning after the championship game on next Monday night.
Elite 8 Matchups:
WEST = Gonzaga vs. USC (Tuesday)
EAST = Michigan vs. UCLA (Tuesday)
SOUTH = Baylor vs. Arkansas (Monday)
MIDWEST = Houston vs. Oregon State (Monday)
UCLA Defeats Bama in Game of the Tournament So Far 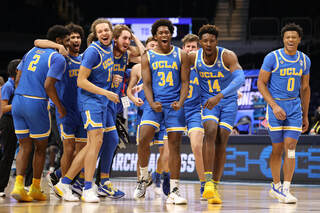 The PAC-12 continues to succeed in the NCAA Tournament.  And now that UCLA knocked off 2-seeded Alabama Crimson Tide, the PAC-12 will have 3 of the final 8.  The Bruins used an big first half to establish a 12 point halftime lead.  Bama came charging back.  And that's when this game got good.  UCLA looked to have the game sealed with three seconds and a 3-point lead, but Bama's Alex Reese nailed a tying 3-pointer at the buzzer.  That was Reece's only made basket of the game, no less.

It was in overtime, Mick Cronin's crew took it the next level.  The Bruins outscored the Tide by 10 points in the bonus period to advance to the Elite 8.  The two happiest people in the planet right now are 1) Bill Walton.  Because if I have to explain, you don't follow basketball.  And 2) Charles Barkley.  Now he doesn't have to go on air with a hound's-tooth hat.
As an 11-seed who was in the First Four, the Bruins are now one of two schools to ever go from the First Four to the Elite 8.  The other, back in 2011 were the VCU Rams, who knocked off the Kansas Jayhawks in the Elite 8 by 10 to advance to Houston in that year's Final Four.
Beavers Take Bite Out of Loyola 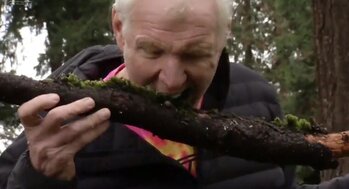 Bill Walton embraces him inner beaver
The twelve seed from the Midwest Region has advanced to the Elite 8.  NO ONE had the Oregon State Beavers advancing to the Elite 8.  Most had Tennessee beating them in the first round.  Only fulltime hippie and parttime basketball analyst, Bill Walton, had Oregon State advancing.
Ethan Thompson led the way for the Beavers scoring 22 points.  Oregon State's defense held Loyola to just 33% shooting.  And the Ramblers only scored ONE point off of Oregon State's turnovers.
Oregon State now waits to find out their opponent later tonight - Houston or Syracuse.  That winner on Monday night advances to the Final Four. 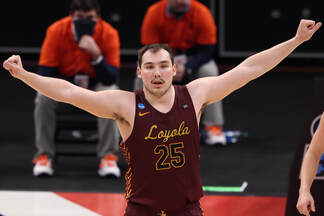 Twelve of us.  That's it.  Twelve out of 166 entries had Loyola Univ. upsetting the Illinois Fightin' Illini.  In comparison, 26 more of us just had our predicted champion eliminated.  This might have been an upset on the seed line, but if you watched the game, the more sound team lead wire to wire.
The Big 10 is having a very rough tournament.  All year long, they were dubbed the best conference.  This tournament is proving that statement as false.  Loyola was led by their big ugly on the inside, Cameron Krutwig, with 19 points, 12 rebounds and 4 steals.   Since 2018, Loyola is now 6-2 in tournament play.
Day 2 Recap - Click Here
Record Number of Upsets Round 1
Texas, Virginia Big Losers on Saturday
Day 1 Summary 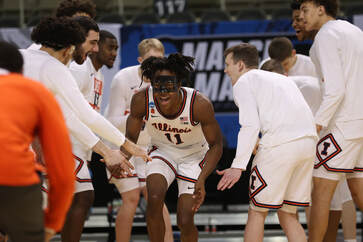