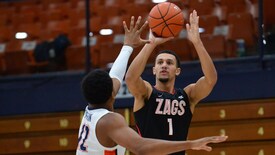 Jalen Suggs of #1 Gonzaga
When Mark Few took over as head coach for the Gonzaga basketball team in 1999, few knew (pun intended) the impact he would have in raising this Gonzaga men’s basketball program into one of the most dominant mid-major teams of the last 20 years. From 16 WCC Tournament Championships to 13 WCC Coach of the Year honors to a Final Four run in 2017, Mark Few has done just about anything and everything there is to accomplish as a college basketball coach. However, there is a major blemish on his resume: the lack of a national championship.
Rewind back to the 2017 season when the Bulldogs came into the National Championship game against North Carolina with only one loss to their name and had all the momentum in the world. With a team led by future NBA talents such as Nigel Williams-Goss, Zach Collins, and Rui Hachimura, there seemed to be no stopping this team. In came Roy Williams and North Carolina, led by Justin Jackson and Joel Berry ll. North Carolina would go on to spoil the Zags bid at a national championship, 71-65. Many thought, at the time, this was the best Gonzaga team under Mark Few, including myself.
Fast forward four years later, and Jalen Suggs and company might have something to say about that. Not only have the Zags won every game so far this season (22-0 at the time of this writing), they have absolutely obliterated every team in their path. With wins over Kansas, Virginia, Iowa, West Virginia and BYU, all in the top 25 of the NET rankings and solid Quad 1 victories, Gonzaga has shown they can hang and destroy the very best college basketball has to offer.
What would have most certainly been the game of the year, #1 Gonzaga vs. #2 Baylor, the game was postponed and ultimately canceled due to COVID. However, most would not be surprised if these two teams end up meeting either in the Final 4 or the National Championship next month. Let’s get our hands dirty and see why this Gonzaga team is poised to make a national championship run.
This year, Gonzaga is tied with Iowa for the best offensive efficiency (OE) in the country at 127.1 points scored per 100 possessions. For reference, their OE in 2017 was only 118.4. While Gonzaga’s defensive efficiency (DE) in 2017 was slightly better at 86.3 compared to this year at 88.8, Gonzaga has held every team they’ve played this year to under 91 points. Gonzaga also leads the country this year in field goals made (FGM), field goal percentage (FG%), 2 pointers made (2PM), 2 point percentage (2P%), and points per game (PPG). Gonzaga is also winning games by an average of 24.7 ppg, which is an insanely high margin of victory.
While one could argue that Gonzaga’s strength of schedule is non-existent considering their in the WCC and their only consistent competition is BYU and St. Mary’s, one cannot deny the dominance in which they’re winning conference games. Gonzaga could easily be putting up over 100 every night, but the games were already over by halftime, so all of the benchwarmers are getting garbage time minutes, making the scores way closer than what the game actually was. For reference, Gonzaga is already up by 15 or more at halftime in 10 of their 13 conference games so far this season.
Not only is Gonzaga winning games, their winning games efficiently. As more and more teams integrate analytics into their program, teams are finding ways to win games in an efficient manner, such as these Gonzaga Bulldogs. From how many dribbles per possession the team has to how often they score in the paint per game, all of these statistics are helping this Gonzaga team become only the 8th team in NCAA history to start the season ranked #1 and finish the season ranked #1.
The only thing left on their agenda: bringing home a national championship for the first time in program history to Spokane, Washington.
picture courtesy of Gonzaga Athletics