Kickers Dancing After 2-1 Victory Over Greenville 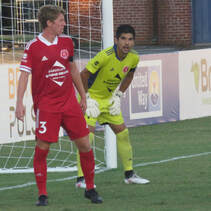 Saturday night in the RVA turned out to be an exciting one for the Kickers, as they closed out the month of August undefeated.  Richmond celebrated dancing style after their 2-1 victory over Greenville Triumph SC and hoisted the Bon Secure trophy high above their heads.
“I can barely hear you guys (media) as the guys are dancing in the hallways,” exclaimed Coach Darren Sawatzky.  Winning their fourth match in a row, the Kickers remain in second place in the standings table with a 4-1-1 record, but improved to 13 points.
Kickers started the scoring early when Matthew Bolduc took the ball down the right side of the pitch, perfectly centering it for Emiliano Terzaghi to finish it in the back of the net during the 15th minute. “Matt (Bolduc) did all the work,” said Terzaghi, who scored his fifth goal of the season versus Greenville.
The hidden factors of the game came out on the defensive side of the pitch.  Greenville might have controlled 59% of the possession, but the Kickers won 56% of the aerial battles, tackling at 70% effectiveness and had 13 clearances.  Goalkeeper Akira Fitzgerald added three key saves.  Though it was centerback’s Ivan Magaihaes’ save that was the highlight.  Guarding the line from a for sure empty net goal, Ivan cleared out a ball destined to find its way to the back of the net.  “Ivan is an instinctual centerback,” Sawatzky added.
Ian Antley contributed on the back line as well.  It was his tackle and takeaway at the beginning of the possession that started the first goal scoring moment.  Antley was not done there as the scoring opportunity originated with his play around the midfield line where Ryley Kraft scored in literally the final seconds of the first half stoppage time after crashing the goal from the deflected shot by Luke Pavone.  “Darren (Sawatzky) expects a lot from us, we lean on each other,” stated Kraft.
Antley’s night however came to an end during the 75th minute as referee Matthew Franz determined Antley’s challenge went ‘cleats up’.  Franz issued the red card sending Antley off the pitch.  The second half water break immediately followed the foul where Coach Sawatzky tried to “rally the troops” and told them to “lock it down.”
“This became a big character moment in our season as we embraced the challenge”, added Fitzgerald.  Meaning, playing with a lead late and down a man.
The Kickers did lock it in, as the Triumph were un-triumphant in their efforts for the final fifteen minutes of the match.
Fitzgerald also spoke of how the Kickers are put action to the social climate locally.  “Its baby steps but we plan to get out to neighborhoods and introduce ourselves to the community.”  Along with Devante Dubose, Fitzgerald highlighted targeted areas in the Richmond area where the team hopes to launch their approach.
Richmond Kickers next match is Saturday, September 5th as they travel to Arizona to battle FC Tucson.  Richmond won the first match, 2-1 on the 15th of this month.
Those wondering, to quote Terzaghi, the best dancer on the team is Stanley Alves.