Decision Day 2020 is Everything a Soccer Fan Could Want 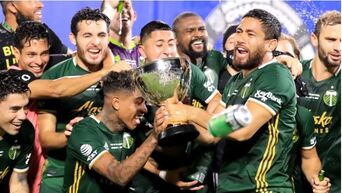 Portland Timbers Champions of the MLS is Back Tournament
This year the Major League Soccer season has been nothing shy of unpredictable and exciting.  MLS brought viewers back in July with their MLS is Back (re-start) tournament.  It re-welcomed the audience to basically every team and every game broadcasted on national television.
After the Portland Timbers were crowned the restart champions, MLS moved into a regional setting regular season.  Where, in most cases, arch rivals found themselves playing one another multiple times over.  For example, teams like Orlando City, played their regional rivals Atlanta United and Inter Miami from the close of August and into early September.  While obviously, teams like San Jose played both Los Angeles programs (LA Galaxy and LAFC) along with teams like Seattle and Portland.
Finally, the regular season opened fully back up with conference play only as teams expanded past their geographical regional settings.
Leading us to this.  Decision Day 2020.  Sounds like an election.  It is not.  Everything is decided on the pitch.  And this season, there is a lot to be decided!  All Eastern Conference teams play exactly at 3:30pm ET on Sunday, November 8th while all Western Conference teams play exactly at 6:30pm ET on the same date.

MLS Supporter's Shield
SUPPORTER’S SHIELD – The trophy for the team with the most regular season points is on the line.  Technically its down to a three horse race.  By tie-breakers only, the Philadelphia Union hold a slight leave over Toronto FC.  This will also determine the number one overall seed in the East.  Mathematically still alive is the current leaders in the West, the Portland Timbers.  They have a makeup game Wednesday night they would have to win and they would need to win Sunday night, have both Toronto and Philadelphia lose, and both teams would also basically need to get blow out along the way. 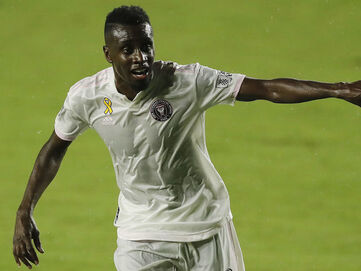 Blaise Matuidi of Inter Miami
EASTERN CONFERENCE PLAYOFFS – Two playoff seeds remain with 5 teams still eligible.  With a Points per Game difference of 0.1 separating the five clubs.
The Montreal Impact currently is the highest ranked team as they travel to DC United on Sunday.
The Chicago Fire might have the most talent on the roster, but have the toughest schedule.  They, too, have a makeup game Wednesday night at Minnesota United (who currently is sitting in 4th place in the West) then their season concludes with New York City FC (the hottest team in the East).
Atlanta United is currently on the outside looking in.  After firing their Head Coach, Frank DeBor, immediately after the MLS is Back Tournament, the 5-stripes have put themselves in a position for a chance at the playoffs.  They travel to Columbus.  The Crew currently sit at third in the East.
Next comes one of the two expansion clubs this season, Inter Miami.  The David Beckham owned franchise is on a tear as of late.  The club signed both Gonzalo Higuain and Blaise Matuidi from Juventus mid-season and since then, Inter Miami has been on a tear.  Inter hosts the only team eliminated from the playoffs in the East, FC Cincinnati.
Finally, still alive and winning three of their last four is DC United.  This late season surge came after the firing of their coach, Ben Olsen.  DC United hosts Montral Impact. 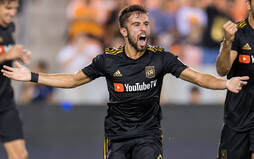 Diego Rossi of LAFC
WESTERN CONFERNCE PLAYOFFS – Two spots remain as well in the West.  Although, mathematically possible, the western conference’s likelihood of going chalk is much higher.  The Colorado Rapids and San Jose Earthquakes basically need to just earn a draw to advance.  Colorado has two games remaining (at Portland; at Houston) while the Earthquake travel to Seattle.  Looking up to both of them are the Vancouver Whitecaps and LA Galaxy.  Both teams need win and help to get in.
GOLDEN BOOT – Not officially his just yet is the Golden Boot, the league’s leading scorer.  Diego Rossi of Los Angeles FC has a two goal lead on Columbus' Gyasi Zardes, but with one game remaining, crazier things have happened.
TOP SEEDS – Oh, and if that was not enough, both conference’s top seeds are still on the line.  Toronto and Philadelphia are trying to earn that right in the East.  While Portland, Sporting Kansas City and Seattle each have a legitimate chance in the West to clinch the top spot.
All of these storylines come to an exciting conclusion this Sunday!
all images courtesy of mlssoccer.com