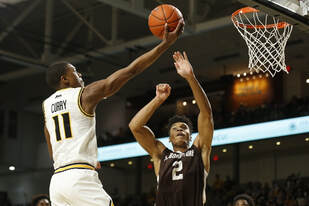 Sometimes it is what is hidden matters most.  In VCU’s huge win against St. Bonaventure, the Rams took over the top line in the Atlantic 10 Conference standings.  Most people will focus on Bones Hyland and his 22 points.  It is not always the headliners or the scorers who help win a game.  When Coach Mike Rhodes says it’s a team effort and everyone contributes, he means it.
Tonight’s hidden gem was the return of Corey Douglas.  The Redshirt Senior returned from an ankle injury and more than just contributed.  The Rams big man only scored 4 points.  Two of which, came at the tip-in at the final seconds of the first half.  His other two points came on a put-back power dunk on a rebound in the second half.  His difference making, rebounding and defense.
With 0:29 seconds remaining, St. Bonaventure’s leading scorer, Jalen Adaway had a chance to cut the VCU lead to one.  Douglas matched up with the Bonnies scorer altering his shot and causing the bad shot to go out of bounds.  Adaway only missed 5 shots all game.  The biggest miss, was because of Douglas’ defense.  Douglas added seven rebounds, four of which were on the offensive side.
“We had so many big rebounds, both offensively and defensively,” said Coach Rhodes.  The Rams came up with 19 offensive rebounds, leading to 16 second chance points.  That comes down to hustling and competing.  Wanting the ball more than the opponent.  “If you’re not competitive, you’re not going to make it here at VCU,” added Rhodes.
Another key factor in the match was the volume of fouls VCU drew.  “One of the key factors tonight was that we drew so many fouls,” stated Rhodes.  The Bonnies only played seven players.  Osun Osunniyi fouled out.  Jaren Helms drew two very early in the first half while Alejandro Vasquez had three by halftime.  In all, St. Bonaventure committed 24 fouls, giving the Rams 26 free throw attempts, to which they made 19 of them.
Insert predictable metaphor here as its icy in Richmond as the shooting could be compared to the weather.  Instead, give credit to both coaches.  Each coach tried and did force their style on the other.  The Rams only shot 36% from the field and the pace of the game favored the Bonnies as well.  But Havoc showed up enough and when it mattered.  VCU forced 15 turnovers, scoring 18 points off of the turnovers.
VCU now takes over the lead and controls their own destiny to a regular season championship in the Atlantic 10 Conference.  VCU improved to 15-4, 8-2 in the conference.  St. Bonaventure falls to 8-3 in the conference and 10-3 overall.
Additionally, VCU’s NET rankings will presumably take a major leap by Saturday morning’s rankings.  Tonight’s win will give VCU their 5th Quadrant-2 victory, now 5-0 in that quadrant.  However, the Rams still sit 0-3 in Quandrant-1 games.  Still, coming into the night’s game, VCU found themselves ranked 38th in the nation.
VCU’s next game is against arch rivals, Richmond Spiders, Wednesday night.
picture courtesy of VCU Athletics