The Teal is Real 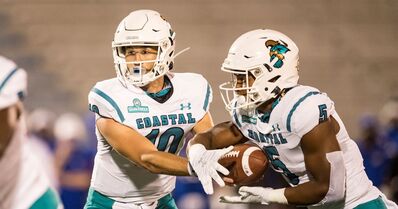 The Sun Belt Conference finished the clean sweep in the Sun Belt – Big XII matchups, as Coastal Carolina Chanticleers pounded the Kansas Jayhawks, 38-23.  This was the second win in as many years by Coastal at Kansas, as they won the previous year as well, 12-7.
Leading the Chants offense, was Redshirt Freshman Quarterback, Grayson McCall.  McCall used both his arm and his legs scoring five touchdowns to help guide the underdogs to a decisive victory.  His first score came early in the first quarter as McCall dialed up his John Elway interpretation of his Super Bowl helicopter spin, over the endzone.
McCall ended the game throwing for 133 yards and 3 scores in the air and added 73 yards with an additional 2 touchdowns.  He was the result from the ‘cat and mouse’ game Coach Chadwell hinted at during his midweek press conference.
McCall was not the only highlight as the defense made their splash, as well.  Teddy Gallagher led the defense with 9 tackles and C.J. Brewer added multiple highlights with two sacks and was on the receiving end from Grayson McCall’s first touchdown pass.
“We didn’t want to let the Sun Belt down.  Hopefully people on the east coast were awake to see it,” said Coach Chadwell.
While the offensive stats may have been in favor of the Jayhawks, but the eye test proved all Chanticleers.  They won where it mattered most: third down conversions, red zone scoring and turnovers.
Kansas had a strong third quarter closing the lead to 11 points.  Then McCall took back over and ultimately sealed the victory, leading his squad on a 9 play, 81 yard scoring drive.
Coastal Carolina returns back to Conway next Friday night to host former Big South rival, Campbell Camels.