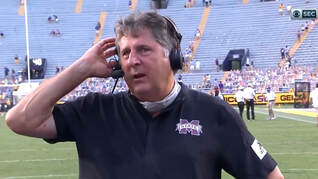 The SEC is back.  And even with only 25% fans in capacity, South Carolina fans proved Saturday night you still can be deafening.
Obviously, the biggest splash of the weekend was the self-proclaimed pirate, Mike Leach, returning to the SEC, this time as the head coach of Mississippi State Bulldogs.  All he did in his first ever game as a head coach in the SEC was help guide the Bulldogs to an upset victory over the defending national champions, LSU Tigers, in Death Valley, no less.  Leach’s air raid offense produced 623 yards passing; an SEC first.  When questioned about the great start to the season, he wittingly put it, “Well its better than an average.”  The pirate also added, “We played LSU today because New England, Green Bay and the Chiefs all weren’t available.”

The other headline coach premiering in the state of Mississippi was Lane Kiffin.  The Lane Train’s opener wasn’t as memorable, as his offense did generate 35 points, but in a 35-51 loss to Florida.  Florida’s QB Kyle Trask led the Gators with 416 yards and 6 touchdowns.  Not bad for a “career backup” leading up to middle of last season.  Tight end, Kyle Pitts was the lead receiving, catching 8 receptions for 170 yards and 4 touchdowns.
The matchup of the night took place in Columbia, SC.  Tennessee came in riding a 6-game winning streak while Coach Muschamp had an all-time record of 7-1 vs. the Volunteers.  In the end, an unfortunate bounce during a punt at the end of the game, sealed the game for the Vols, as they recovered the bounce off the Gamecocks.  The game was highlighted by back and forth drives by both schools.  Tennessee led a balanced attack with 33 rushes and 31 passes, amounting in 394 yards in total offense.  Josh Palmer’s 32 yard touchdown reception was the clincher for Tennessee.  South Carolina could only amount a field goal on their final possession.  Then, as mentioned above, the Gamecocks held Tennessee on their final possession, only to have the punt bounce off the leg of Cam Smith. 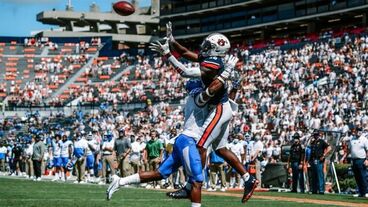 Auburn opened up their 2020 campaign with Gus Malzhan dressing in tribute to legendary Auburn HC, Pat Dye.  Still to be determined if Gus hit the bottle prior to kickoff, if he was in full tribute mode or not.   Auburn’s passing attack, clearly their strength as the Tigers receivers had 16 receptions for 233 yards and 3 scores.  The ground attack, reminded everyone of the end of the Terry Bowden era with a bunch of small backs who could not get the short yardage when they needed it the most.  The play of the game actually came in the final moments of the first half.  After a subjective spot and marking by the officials giving Kentucky third and goal at the goal line, Wildcat QB, Terry Wilson, tried passing in the endzone, only to have the play intercepted by Roger McCreary who returned it the distance for a touchdown.  During confirmation review, the referees confirmed he indeed stayed in bounds, however they noticed targeting on the play, nullifying the score.  The second half defense for Auburn also set tone.  After allowing Kentucky to convert 8 of their 11 third downs in the first half, the Tigers only allowed 4 third down conversions the 2nd half.
All the hype this off-season was on the potential of Texas A&M and how this was their year.  Schedules were changed and the good people at SEC Shorts had lots of fun mocking their schedule change this offseason.  Well, even with schedule changes, no one in the SEC will ever complain about opening their season with Vanderbilt, at home.  With that said, in a lackluster effort, the Aggies moved to 1-0 over the Commodores.
The preseason SEC leader, Alabama cruised in their opening victory over Missouri.  Clearly two different talent levels took place in the Zoo.  The biggest question for the Tide would be who would be the heir-apparent to Tua.  That question was answered with Mac Jones, only missing on six passing attempts and just under 250 yards with two scores.  All pre-season runningback, Najee Harris, only netted 98 yards rushing, but scored three times.
It took the Dawgs most of the first half and a quarterback change before they took it to Arkansas to open their season.  Georgia, you can argue, on their 4th string quarterback, as Wake Forest transfer, Jamie Newton opted out; and USC transfer, JT Daniels, still not medically cleared.  It ended up being Junior QB, Stetson Bennett to help lead the Bulldog offense over arguably the weakest team in the SEC.
POWER RANKINGS: SEC GAME BALLS WEEK 1:
KJ Costello, QB, Mississippi State (623 yards passing, 5 TDs)
Kyle Pitts, TE, Florida (8 receptions, 170 yards, 4 TDs)
Najee Harris, RB, Alabama (98 yards rushing, 3 TDs)
Seth Williams, WR, Auburn (6 receptions, 112 yards, 2 TDs)
Nolan Smith, LB, Georgia (6 tackles, 1.5 sacks, 1 safety)
co-Deandre Johnson, Jack LB, Tennessee (6 tackles, 2.5 sacks, 1 forced fumble)
co-Henry To’o To’o, LB, Tennessee (6 tackles, 1 pick-6)
Buddy Johnson, LB, Texas A&M (11 tackles)
pictures courtesy of SEC Sports