Jared Goff, the #1 overall selection in the 2016 NFL Draft
The 2021 NFL Draft will be dominated by rumors and trades all aiming for the most important position on a NFL team, the Quarterback. So far in 2021 we have seen Matthew Stafford traded to the Rams from the Lions for 2 first round picks and Jared Goff. We hear rumors out of Houston that Deshaun Watson wants to be traded. How many first round picks will he cost? Not to be outdone, Russell Wilson in Seattle is complaining about his situation. Will Miami flush Tua Tagovailoa and draft another QB in the first round? What will the Jets do with Sam Darnold? Questions and more questions. Tantor intends to make you doubt what you know about the drafting of a QB in the first round. 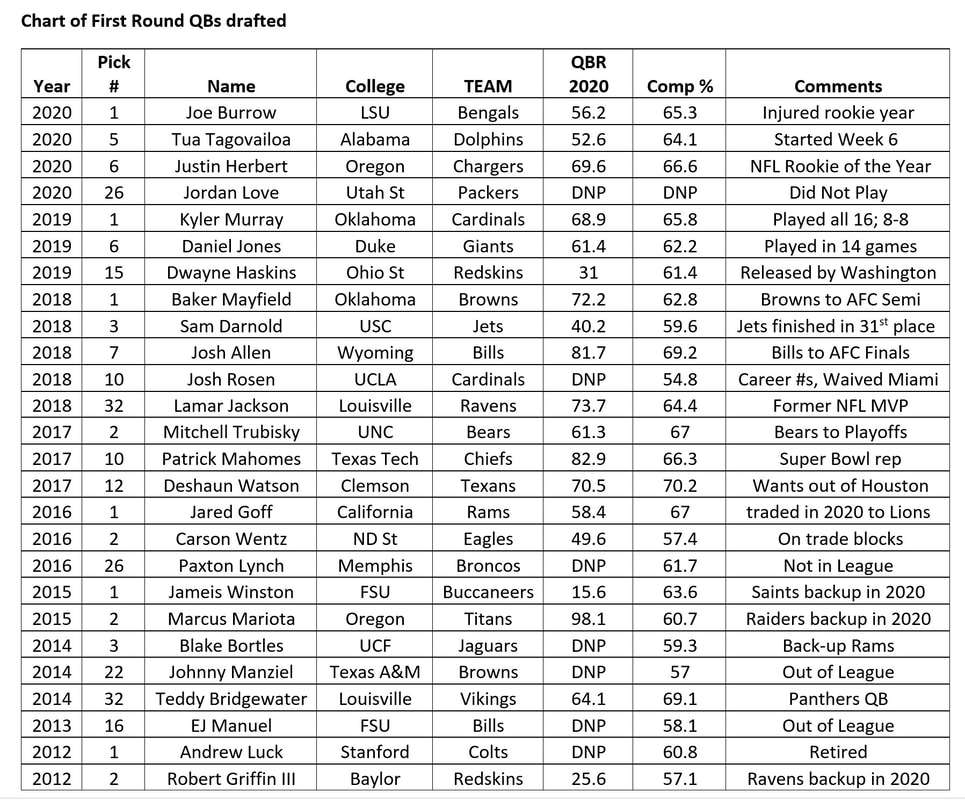 A misconception is drafting a QB in the first round will guarantee a Super Bowl appearance. Wrong. Since 2008, out of 39 QBs drafted in the first round, only 5 have started a Super Bowl game. Mahomes, Goff, Newton, Ryan and Flacco. Out of those 5, only Mahomes and Flacco have won a Super Bowl. Carson Wentz was injured when the Eagles won the Super Bowl. His backup, Nick Foles, stared and beat the Patriots. The percentage of drafting a SB winning QB in the first round is only 5.12%. Are you beginning to think about how your team drafts yet?
Here is another fact to consider. Since 2008, 13 first round QBs are no longer playing football in the NFL. That is correct, 33.3% of all first round QBs are out of the league. We are not even counting guys that are career backups either. Which increases the failure rate.
We do have 19 first round selections that did start for their teams in 2020. The level of success does very. Tantor would love to have 70 plus QBR guys Patrick Mahomes, Deshaun Watson, Lamar Jackson, Josh Allen or Baker Mayfield as his QB. For every one of these players, we have just a guy (JAG) doing enough to start such as a Teddy Bridgewater, Ryan Tannehill or Cam Newton. What does a team do with sub 60 QBR guys such as Tua Tagovailoa, Joe Burrow, Dwayne Haskins, Carson Wentz and Sam Darnold?
Consider another view point. Drafting a QB in the first round is not a guaranteed path to success. There are many different ways to put together a NFL team. The successful teams are not drafting a QB in the first round. Ever hear of the New England Patriots and 6th round pick Tom Brady? How about 3rd round Seahawk pick QB Russell Wilson? When you hear Trevor Lawrence, Zac Wilson and Justin Fields. Do not go crazy wanting your team to trade up for one of these guys. History says one will be out of the league within 5 years, one will be a career backup and only one will even make the playoffs. Tantor is betting on the math that none will ever play in a Super Bowl.
picture courtesy of USA Today