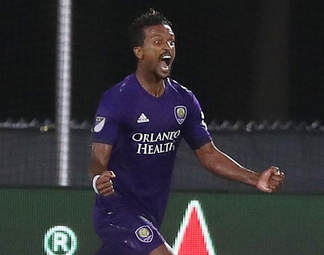 Coming into the start of the 2020 season, Orlando City SC had never advanced to the playoffs.  Now after Wednesday night, the team stands in sole possession of second place in the Eastern Conference, with 10 games remaining in the regular season.
The Lions also set a franchise record with their victory over Sporting Kansas City with their seventh consecutive game with either a win or a draw.  “Oscar Pereja has done such a good job at cultivating a full squad that knows they need to play at any moment and feels that the coach has confidence in them to play,” said Orlando City SC Play by Play Commentator Evan Weston.
Previous to the start of the MLS is Back tournament, Orlando had won 11 of their 61 games.  Since the tournament, including the knockout rounds, the Lions now have a remarkable record of 10 wins, 3 draws, 2 losses.  “The turnaround, simply remarkable,” added Weston.
“Oscar took what was there and made it better,” said MLS Senior Writer, Matt Doyle.
Nani scoring 4 goals and 3 assists, one of Orlando’s designated player from Portugal, may be the face of the franchise, but it is a complete and balanced roster.  Leading the team in scoring is homegrown midfielder, Christian Mueller, with 7 goals and 4 assists.  Rookie sensation Daryl Dike not only has added 3 goals and 3 assists since being inserted in the starting lineup, but was named MLS Player of the Month for August.
Defensively, Orlando City feels just as strong.  Swedish centerback Robin Jansson manages everything in the middle and offers a tough boot on certain set pieces.  Attacking from the outside is their speedster rightback from Brazil, Ruan; who arguably is the fastest player in the league.
Orlando is currently the third highest scoring team in the league with 25 goals scored, thus constantly posing their will on defenses.
The team now travels on Sunday, September 27th, to FC Dallas.  Including their win in Kansas City Wednesday night, each flight arrives approximately three hours before kickoff.  Then, the team returns the same day, making each road victory that much more impressive.