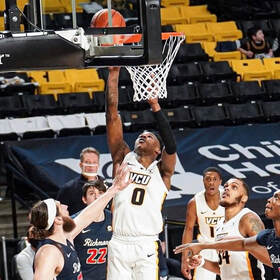 Jamir Watkins scores 2 of his 10 points for the Rams
VCU’s win streak hit six straight wins with their 68-56 win over their cross town rivals, Richmond Spiders Wednesday night.  Known as the Capital City Classic, the rivalry features two vast contrasts of styles of play – Richmond with the Princeton style of backdoor cuts and VCU known for their Havoc style and speed.
VCU only forced five turnovers on Richmond, but it was their half court offense compounded with their pesky defending that made the difference in the game.  “We’re going to play defense and we are going to press,” said Head Coach Mike Rhodes.  “We practice hard and we play harder,” he added.
Playing perfect to the half court style the Rams as a team had 21 assists on 26 made baskets, including seven different players had at least one assist.
Bones Hyland led the team in scoring with 20 points, but four Rams scored in double-digits, as well.  Hassan Ward added 11 while both Ace Baldwin and Jamir Watkins each added ten.
The hidden gem of the Rams continued to play his role perfectly.  Corey Douglas may have only scored one basket (a break-away dunk), but his defense of presence underneath was ‘havoc’ on Richmond’s big man, Grant Golden.  Golden, who averages just under 14 points a game, was held to just 2 made buckets out of 11 shot opportunities.  Mostly because of Douglas’ pesky defense.  “The next level wants winners.  So help your team win now here at VCU and learn how to win.  Whether Corey wants to play professional next year in Europe or return here, he’s learning how to win.  And that’s what they (professional teams) want most – winners,” stated Rhodes.
This was the sixth consecutive win by VCU, dating back to January 23rd when the Rams defeated Dayton.  This will also give VCU more than likely their sixth Quadrant-2 win (6-0), to help improve their current (as of February 17, 2021) NET Ranking of 33rd in the nation.
With just over two weeks remaining in the regular season the Rams are peaking at the right time.  The Atlantic-10 has had multiple teams qualify for the National Championship tournament every year since 2007.  VCU currently sits a top the Atlantic-10 mountain with a 10-2 conference record and 17-4 overall.
Next up for VCU comes in-state counterpart George Mason this Saturday, currently scheduled for a 2:30pm tipoff in the Siegel Center.