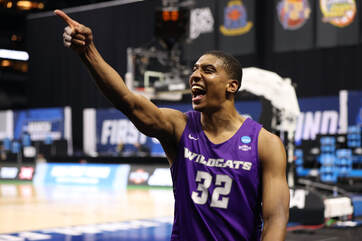 14-seeded Abilene Christian upset Big XII and 3-seeded Texas Longhorns
Oh how the mighty keep falling!  Please add Virginia and Texas to the list.  In what seemed a pretty chalk Saturday afternoon, ended with a double-bang Saturday night.  First, the “defending” National Champions (2019, no champion in 2020) were eliminated by the Ohio Bobcats from the Mid-American Conference.  After leading most of the game, Virginia went on an Antarctic level cold streak and gave Ohio a chance; to which they won 62-58.  Virginia only scored 4 points between the 10 minute mark and the 2 minute mark.  In essence, in the span of two tv timeouts, the Cavaliers could only make two baskets.  This, was their fatal flaw.  Ben Vander Plas led Ohio with 17 points.
After Shaka Smart led his Texas Longhorns to his first Big XII Championship, he found himself as the only Big XII representative eliminated in the first round.  Give Abilene Christian credit.  They super slowed down the tempo and they forced 22 turnovers.  As a team they did not shoot spectacular, but when the Wildcats held Texas to a total of 60 possessions and only shot 42%.  The low volume is how Abilene Christian was able to pull off the massive upset.
In the most heart-breaking of heart-breaking exits, VCU was not even allowed to participate.  After multiple players tested positive, the NCAA Committee, under advisement from local authorities had to declare the Oregon-VCU game a no contest.  The Rams were sent home about 2 hours before tip-off; the Ducks advanced.  Out of all the ways to be eliminated from the tournament, this has to be ranked as the worst possible way.
In one of the better games of the day, though not an upset, Creighton survived past UC Santa Barbara.  The Gauchos were one of the 12-seeds projected to pull the upset.  After Creighton’s Big East Championship game debacle, the Bluejays rebounded and were able to survive and advance to Monday.  How weird is that to say, 2nd round being played on a Monday afternoon.
In another 5-12 matchup that did not live up to the hype or upset buildup, the Colorado Buffaloes absolutely destroyed the Georgetown Hoyas.  After a first possession turnover, it felt like Colorado did not miss another shot the remainder of the first half.  Not to be outdone, the Buffs made an unbelievable 69% of their shots in the second half, routing Georgetown 96-73.  Added to the beat down, Colorado made 16 three-pointers.
Both one-seeds on Saturday proved their dominance as Michigan and Gonzaga easily advanced to the round of 32.  Michigan defeated Texas Southern 82-66, while Gonzaga destroyed Norfolk State 98-55.