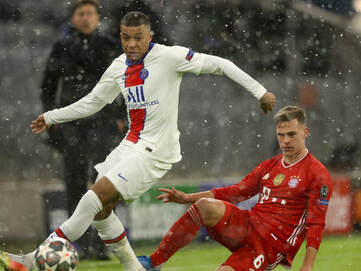 Mbappe scored 2 goals for PSG in their road victory at Bayern Munich (picture courtesy of The Independent, UK)
In arguably the best game of the 2020-2021 Champions League Tournament thus far (Group Stage or Knockout Round), Paris St. Germaine came into Germany and upset the defending champions of Bayern Munich.  Led by 2 goals by Mbappe, the French based team used snowy conditions and a Robert Lewandowski-less Munich squad to their advantage.
In the third minute of the game, Kylian Mbappe brilliantly found the back of the net after blasting a shot from around the 6 after receiving a great pass by Neymar.  Neymar assisted with the second goal of the game, as well, as the Bayern Munich left Marquinhos all alone when the back four stepped up and unexpectedly were caught looking as Neymar played a beautiful ball to his teammate.
The defending champions came roaring back scoring off of two different headers by Choupo-Moting and Thomas Muller to tie the game by the 60th minute.
As if taking 2 away goals with a draw back home was not reward enough, PSG added a game winning goal by Mbappe just 8 minutes after Bayern Munich tied it up.  Scoring off the counter attack, Mbappe crushed the ball in the bottom left corner of the net to give PSG the "upset" victory.
PSG is now up 3-2 with their home match of the aggregate next Tuesday.  The winner advances to the Champions League Semi-Finals.  They will be joined by the following = Manchester City currently leads 2-1 against Dortmund.  Chelsea scored two on the road "at" Porto and Real Madrid did their job at home defeating Liverpool, 3-1.  Each now travels to their opposite for the 2nd Leg of the Quarterfinals next Tuesday and Wednesday.