Lawrence Not Necessarily the Heisman Front Runner Just Yet
by Charlie Krausse        October 27, 2020 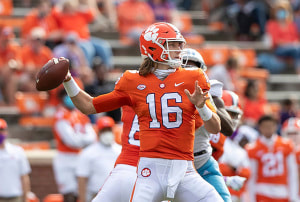 The debate begins every year – who should win the Heisman Trophy.  And every year there is a presumptive front-runner.  This year, that person is Trevor Lawrence.  Either because the Big 10 did not begin play until a week ago, or that Trevor Lawrence’s social media tweet went viral when no one was sure if college football would take place this fall.  Lawrence is the front runner to win the most recognizable trophy in college football.
But is he?  Is he good?  Absolutely.  Is he in the lead pack?  Absolutely.  Although, when you break down the numbers, subjective arguments can be made.
Starting with something he specifically cannot control.  Clemson has a weak schedule.  That is a factor, especially at the quarterback position.  At the mid-point in the season, the Tigers have only played one opponent with a winning record.  The remainder of their first half schedule was against FCS opponent The Citadel and the bottom half of the ACC in Wake Forest, Virginia, Georgia Tech and Syracuse.  As impressive of numbers as he put up in those games, the quality of opponent just is not there.
In comparison purposes, his biggest rival, Justin Fields, has only played one game.  Did he put up phenomenal numbers, of course he did.  Again though, the quality of opponent, for that one game, simply is not there.  Nebraska is not even your older brother’s Nebraska, much less your father’s Nebraska teams of old.
Move over to SEC country where Alabama’s Mac Jones could make serious argument to be invited to New York City (assuming they will allow an in-person presentation).  Comparing Jones’ numbers to that of Lawrence, Jones has a 78.8% completion rate while Lawrence is “only” completing 70.7% of his passes.  Alabama has played a tougher schedule with wins over two Top 10 teams in Georgia and Texas A&M.  As well as middle-of-the-road teams in Tennesse, Missouri and Ole Miss.
Mac Jones is also averaging more passing yardage per game – 381 to 305.  Adding to the argument, Jones’ quarterback rating is much superior to that of Lawrence, 212.75 to 178.57.  Both, still impressive.  Lawrence has thrown for more touchdowns and scored more, leading that argument 21-13.
Just for fun, we can throw in BYU’s golden arm, Zach Wilson.  His schedule will not do him any favors.  The Cougars biggest win thus far is ironically at the Cougars, of Houston.  Wilson’s numbers are great, but given the quality of opponents at this high level of conversation, the numbers are expected.  He is just below Jones in both quarterback rating and completion percentage, 210.41 (rating) and 78.3% (completion).  Wilson has scored 22 touchdowns while averaging 321 yards per game passing.  Sorry, Cougar fans, you are simply wearing your blue goggle again thus far.
The quarterback position is the only true position where wins and losses matter for this award.  With that, bringing into the conversation is 1-loss, Iowa State runningback, Breece Hall.  The sophomore, leads the nation in rushing with 143.2 yards per game and has scored 9 touchdowns in 5 games for the Cyclones.
At the end of the day, is Lawrence the frontrunner?  Maybe.  But the award is definitively not guaranteed to him at the midway point in the season.  Lots of arguments, fun discussions, water cooler debates and internet chat boards remain over the final half of the season.  Only time will tell.  Until then, this article will simply serve as a catalyst to further the debate and enjoy the ride.

picture courtesy of the Clemson Insider