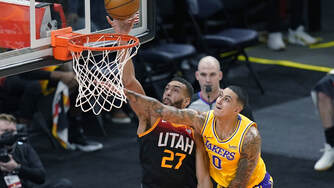 The first place Jazz defeated the LA Lakers Wednesday night, 114-89
With two of the best teams in the NBA matching up head-to-head on a national TV, expectations were sky high. Mitchell vs. James. Gobert vs. Davis. Potentially a preview of the Western Conference Finals, all eyes were glued on this game. However, the injury bug hit the Lakers hard as Anthony Davis, selected for the All-Star game, was diagnosed with a calf strain and is expected to miss the next few weeks while Dennis Schroder is out due to contract tracing from COVID.
The absence of Davis and Schroder showed as the Jazz proved why they are the best team in the league, blowing past the Lakers, 114-89. In an all-around team effort led by 6th Man of the Year frontrunner Jordan Clarkson and Defensive Player of the Year candidate Rudy Gobert, both finishing with 18 points, the Jazz knocked down a blistering 22 3 pointers on an efficient 45.8% from beyond the arc. The Jazz were able to contain MVP candidate Lebron James as he was only able to muster 19 points on 8/18 shooting.
The Lakers were able to keep it close with the Jazz up until about halfway through the 2nd quarter where the Jazz went on a 20-7 run. The Lakers were never able to overcome the deficit, as they trailed the rest of the game. Donovan Mitchell, named to the All-Star reserves list along with teammate Rudy Gobert, only finished with 13 points, but was able to find other ways to contribute as he grabbed 10 rebounds and dished out 8 assists.
As the Lakers limp to All-Star week on a 4 game losing streak, the Jazz continue their historic hot streak as they have won 23 of their last 25 games. With Coach of the Year candidate Quin Snyder leading this team, the Jazz are well on their way to finishing with the best record in the NBA and making a run at their first Finals appearance since Stockton and Malone lost to Michael Jordan and the Chicago Bulls in the 1998 NBA Finals.
The Jazz will head off on a 4 game road trip starting with the Miami Heat Friday night while the Lakers will host Damian Lillard and the Portland Trailblazers on ESPN that same night.
picture courtesy of Fox Sports