Defense Rises as Coastal Wins 7th in a Row 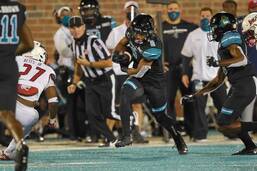 Football is a team game.  Every side of the ball is not always going to be running on full cylinders.   Tonight for the 15th ranked Coastal Carolina Chanticleers proved just that.  After the first quarter, the offense would not score another touchdown the remainder of the game.  Insert dominating defense here.
The Black Swarm defense proved their nickname and reputation throughout the night against South Alabama.  The defense racked up five sacks, 2 forced fumbles and stopped four fourth down conversion attempts.  Additionally, the defense racked up a season high 81 total tackles.
The offense could not click after the first quarter.  Redshirt Freshman Grayson McCall put up 281 yards in total offense throughout the game and threw for an early score.  Though, the freshman signal caller also fumbled during a quarterback designed run.
Silas Kelly led the defense with 12 tackles while perennial Sun Belt Defensive Player of the Year, Tarron Jackson 10 tackles, 2.5 sacks, 2 quarterback hurries and a forced fumble.
For the third game in a row, Coastal Carolina’s defense has not allowed a single point in the second half.
The Chanticleers move to 7-0 for the first time since becoming a FBS level program.  Next week Coastal Carolina hits the road to face Troy, before returning home  to face Sun Belt powerhouse, Appalachian State.
picture courtesy of Myrtle Beach Sun