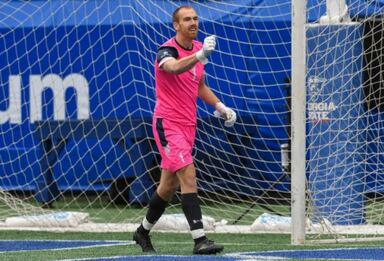 Tor Saunders named Sun Belt Tournament MVP
The year 2020 has already been a screwed up year to begin with, so why not let it confuse people more when it comes to how the fall 2020 Division-1 men’s soccer season will play out!  What is traditionally a true fall sport, crowning their national champion in early December every year; this year, the NCAA has pushed back the national tournament until Spring 2021.
For schools like Coastal Carolina University, it just means that much wilder of a ride.  On Sunday, November 15, 2020, the Chanticleers won the Sun Belt championship in penalty kicks (4-3) defeating the Georgia State Panthers, thus automatically qualifying for the NCAA tournament.
Goal Keeper and Sun Belt Tournament MVP, Tor Saunders had the mindset, just save one.  And save one, he did just that.  Up 3-2, Saunders made his moment, having a diving save to as the soccer world calls it, lower 90 of the left hand side of the goal.
Saunders added, “We actually practiced penalties the day before and remember thinking if it comes down to penalties, we’re going to have a really good chance,” in reference to his teammates shots during practice.  The Chanticleers goal keeper during the huddle before the kicks began addressed his team, “I’ll save one.  You guys will take care of the rest.”
Now the fun begins.  “Its just as confusing for us, as it is for you guys,” Saunders said in tongue-in-cheek.  “The picture is now a little more clear,” he added.  This fall, Coastal Carolina played their conference schedule and won their conference championship, thus clinching the Sun Belt championship and a bid in the NCAA tournament.
After break, “we will train for a couple of weeks, then pick up with out of conference games,” injected Saunders.  The Chanticleers main goal for their non-conference schedule is to build their RPI.  Currently ranked 5th in the polls, the boys in teal want a home tournament seed.  “So even though we’ve already clinched a birth, our mindset is improve our RPI and get a home game.”
Saunders earned the tournament MVP, but his regular season stats backed up his efforts.  He had 31 saves with 5 clean sheets (shut outs) and a save percentage of 86%.
Saunders is a former member of the Seattle Sounders (Major League Soccer) Youth Academy where he has trained with the Sounders and even mimicked parts of his game after current goalkeeper Stefan Frei.  “They are such a great organization and it feels like a family to me,” said Saunders.
picture courtesy of Sun Belt Conference