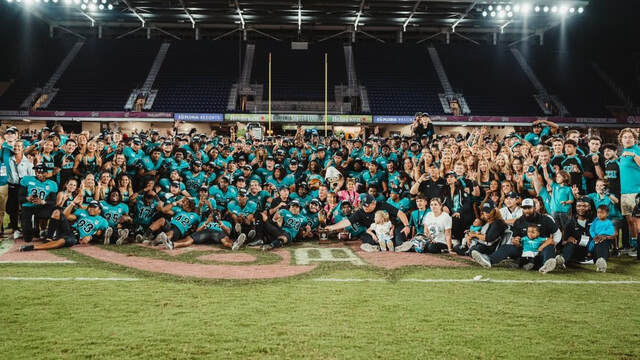 Coastal Carolina celebrate their first ever bowl victory at the Cure Bowl
Coastal Carolina returned to the place that ended their perfect 2020 season – the Cure Bowl.  This time, the final results were different.  The drama and excitement, though, remained the same.  In a thrilling ping-pong style of a match, Coastal Carolina outlasted Northern Illinois 47-41 to win the Tailgreeter Cure Bowl.
“Our team never gives up and they believe in each other,” state Head Coach Jamey Chadwell, “and for them to come up short last year in this game and then for them to find a way to win tells a lot about their character and who they are.”
Both defenses were exposed throughout the first half as each offense imposed their style on the opposite defense throughout the first half.  Northern Illinois had four real possessions (and a kneel down) to open their first half, scoring 24 points.  While Coastal Carolina’s explosive offense was ‘limited’ to 11:29 of possession and 19 points.
The second half fireworks began early as Coastal Carolina took the half’s opening possession and marched down the field in 5 plays moving the ball 75 yards as QB Grayson McCall found future NFL Tight End, Isaiah Likely for his second pretty one-handed grab, this one for 27 yards, putting the Chants back on top 26-21.
Northern Illinois returned fire scoring on their second half opening possession, retaking the lead.
Redshirt Freshman Brayden Bennett’s speed became a difference maker, scoring three touchdowns throughout the night.  Bennett’s 60 yard dash on Coastal’s second play of their next drive reclaimed the lead.  “I’ll say this about Brayden (Bennett), I have to play against him in practice and he’s a menace,” stated Super Senior Linebacker Silas Kelly.
Down eight in the 4th quarter, the game and momentum began to change.  Which most could find ironic in looking at the stats only.  Northern Illinois ran 33 plays in the 4th quarter to Coastal Carolina’s 10.  The Huskies maintained possession for 11:15 to the Chants 3:45.  Yet, the feel of the game said Coastal Carolina.
Grayson McCall found Isaiah Likely down the sidelines for a 40 yard score (as he slowed down to try and hurdle a potential tackler) to cut Northern Illinois’ lead to 2 points.  Though the Chants attempt for the 2 point conversion failed with the fade attempt to Likely.
Insert dramatic music and plot twist here.  It was Northern Illinois whose run game massed up 335 yards of total offense that was held in check.  After a modest gain on first down, the Huskies ran a reverse where Trayvo Rudolph baseball slid on the play, stopping his momentum for a 7 yard gain.  Now third down, the Huskies needed just one yard on their own 34 yard line.  QB sneak attempt by Rocky Lombardi (who rushed for 66 yards and 1 TD on the night) was held for no gain.
Fourth down, and Northern Illinois reached into their bag of tricks.  Lombardi looked to the sidelines as to give up on the play, when Coastal Carolina DT, CJ Brewer pointed to his teammates the play was still live.  The direct snap to Rudolph was met by a quora of Chanticleers forcing no gain and turning over the ball on downs.
On the game’s ensuing play, McCall ran the read, triple option to his right, giving a shuffle pass to Bennett who took to the corner scoring from 34 yards out.  This two point conversion attempt from McCall to Likely was good, giving Coastal the 47-41 lead.
Rekey dramatic music.  Final drive of the game for Northern Illinois turned out to be their longest (83 yards) and most plays ran (15) of the night.  Memories of the BYU ending filled the heads of Chanticleer fans everywhere.  With seven seconds left and ball on Coastal Carolina’s 8 yard line, Lombardi completed his pass to Miles Joyner but was tackled in bounds by Manny Stokes as the clock ran out on the Huskies at the 4-yard line; sealing Coastal Carolina’s first ever bowl victory at the Tailgreeter Cure Bowl. 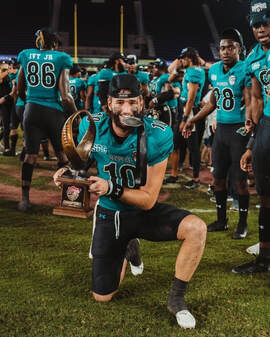