Coach Scott:  The Strength of the Chanticleers

“What most people don’t understand, football is tough.  You train more than you play.  He (Scott) gets players excited about getting better.  That’s hard to do.”
- Jamey Chadwell, Head Football Coach Coastal Carolina University 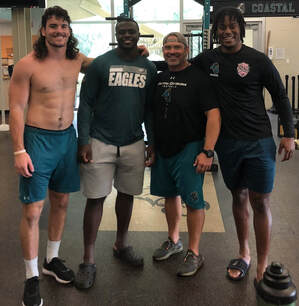 Pictured left to right: Silas Kelly, Tarron Jackon, Coach Chad Scott, Isaiah Likely
​Every football program has a strength and conditioning coach.  Every football team also gets bigger, stronger and faster by the end of the season compared to the season’s beginning.   So, what’s the difference?  What makes one strength coach excel and perform above others?
For the Director of Strength and Conditioning at Coastal Carolina University, Chad Scott, that answer began forming its roots in 1997 – 2001 as a member of the Eastern Kentucky University football team.  Under the tutelage of their Strength and Conditioning Coach, Mike Tent, Coach Scott learned about passion and connecting with players while building their confidence.
Fast-forward just over a decade, as the term goes, while Coach Scott was “cutting his teeth” and working up the ranks. In 2013 he was the Strength and Conditioning Coach at Charleston Southern is where fate led him to meeting Coach Jamey Chadwell for the first time.  Then in 2019, Coach Chadwell offered Scott the opportunity to become a Chanticleer.
“The skeleton and map of players and what we are wanting to do is pretty much the same across the board.  Where we get into the specifics and add on pieces based on player’s body type, those are auxiliary pieces that match what the guy needs for his skill set,” commented Coach Scott.
Whether the players walking into the facilities in June are either a walk-on freshman or a fifth-year senior, Coach Scott and staff have 9 weeks to get every individual ready for the rigors of the football season.  “Its football.  Anything can happen,” added Scott.  “If I treat that kid like a true redshirt and then something happens and he’s playing, I’ve done him a disservice.”
This, he believes, is why the team does such a great job in the weight room.  “Everyone is doing the same core lift.  Everyone is straining the same way.  Everyone is working for each other and the same common goal,” reflected Scott.
“He’s there for every workout and every practice – challenging us,” stated Senior Captain Defensive Tackle, Jerrod Clark.  “Its not like a boot camp, it’s a fun competition making you stronger and wanting to be in there.”
Compounding his commitment to the Coastal Carolina Football team and helping the Chanticleers achieve their annual goals, his home life goals remain.  Coach Scott chooses to commute approximately two hours each way, daily.  When accepting the job in Conway, he did not want to break up the family life already established.
The commute time frame, as a lot of coaches from any coaching world will attest, that drive time is the best reflection time.  “I roll my window down and its just me and my thoughts on what we accomplished that day,” stated Scott.
“He shows up everyday ready to work, but more importantly to me, he is a life coach.  He is always there ready to talk,” added starting Quarterback Grayson McCall.
So why is ‘this’ his process, working?  “Its more than just sets and reps.  Its about developing true relationships with young men.  We’re preparing them mentally for the world outside of football,” said Scott.
As Coach Scott ended, “Everyone wakes up each day with two things.  You have a choice and you have a chance.  What you do with that choice and if you take that chance, that’s on you, but when you wake up that morning, you have that opportunity.”