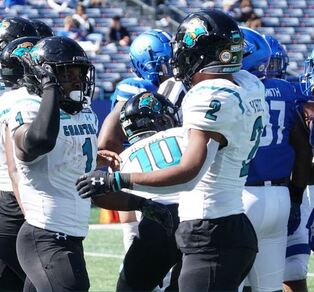 Coastal Carolina came into Atlanta, GA not worried about ‘trick or treats’ while an argument can be made Georgia State came dressed up as football players.
Unless someone simply does not follow college football everyone has learned what the Coastal Carolina Chanticleers are doing this season.  Today was just the newest example, in their most dominant performance in the season.  Putting on the breaks at the end, still winning 51-0 at Georgia State, giving a treats to the Coastal Carolina fan base on Halloween afternoon.
The Chanticleers put it to the Panthers in every aspect in the game, including coaching and discipline.  The defense recorded their first shut out of the season, holding the Sun Belt Conference’s highest scoring team to just 106 yards of total offense.  While the Coastal offense put up 530 yards.
The 20th ranked Chanticleers were led offensively by redshirt freshman, Grayson McCall.  After missing last week with a minor shoulder injury, the signal caller had 5 touchdowns, 4 of which in the air.  More impressively, McCall’s offense controlled the ball for more than 41 minutes of the game, which is basically 68% of the ball game.  While ten different receivers caught a pass, showing balance and depth.
Defensively, the ‘Black Swarm’ nicknamed defense was simply dominant.  Georgia State only converted one first down opportunity on third down and that was on the opening drive of the game.  Taron Jackson led the defense with a sack, a QB hurry which directly led to an interception and forced two fumbles.
The Chanticleers also proved they were the more disciplined team on the field.  Coastal only committed one penalty (and yet, they still scored on the very next play) while Georgia State committed multiple personal foul unnecessary roughness penalties, including a punch to the head of McCall.
Coastal Carolina has proved over the past few weeks is they can handle the national attention.  Today’s win was a national statement, not only can they handle the hype, but they are ready for the next step in their journey.  That step will have to wait three more weeks.  The Chanticleers most stay focused for South Alabama and Troy over the next two weeks before they can circle the calendar.  On November 21st, the Chanticleers will host Sun Belt powerhouse and defending 4-time conference champion, Appalachian State.
The Mountaineers will be favored in the remainder of their games with their only true challenger remaining being Coastal Carolina.  With ESPN’s love for Coastal Carolina in recent weeks, look for College Game Day to give the Chanticleers an honest look in possibly coming to Conway, SC the weekend before Thanksgiving.