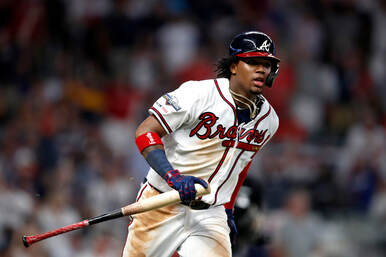 Ronald Acuna Jr was a force for the Braves during the 2020 season
Pitchers and Catchers reported to North Port Florida this week to officially start MLB spring training. There will be no split squads or games against college teams this year. The Braves have invited 65 players to spring training. I have listed the Braves 40 man roster and non-roster camp invitees with all my “fun” charts (Appendix A) at the end of the article for all my fellow stat nerds.
The only thing worse than having a garbage team owner (Washington FT-Dan Snyder or Houston Texas – Janice McNair) is having a corporation owning the team. The Atlanta Braves are owned by Liberty Media Corporation. Winning on the field is secondary to the financial bottom line. A sad but true statement. Luckily, Braves General Manager Alex Anthopoulos and Manager Brian Snitker are amazing at working under a limited financial budget (Appendix B) developing players and getting the most out of player talent. Look at the Braves player roster and the majority of players are developed in the Braves system. Tantor does give credit where credit is due. Anthopoulos and Snitker deserve all the credit for the 2020 Braves success.
Can the Braves repeat their success in 2021? Too early to tell, but Tantor likes their chances. Tantor will give you his projected 2021 opening day 26 man roster and batting order. (Appendix C) There are a few assumptions. One is that the Braves will open with 13 pitchers and 13 position players. Another is that the team’s best pitcher, Mike Soroka, will open the season on the IR. Soroka is recovering from Achilles surgery. He is saying all the right things about being ready for the start of the season, but no way do the Braves rush him back. Soroka is a true “A” level talent that April and May games are not important to his career. Soroka is an October pitcher.
Sunny and Chick-fil-a make a perfect day. That is where the starting rotation is at. Led by Fried and Anderson at the top. This is worthy of challenging the dreaded LA Dodger rotation. Charlie Morton and Drew Smyly were signed to provide veteran depth. Playoff Hero, Kyle Wright holds on to the 5th spot until Soroka can go again. This rotation should be deep and nasty.
The top end of the bullpen should still be good after many changes. Tantor’s hometown boy, Will Smith, should close after set-up lefties, AJ Minter and Tyler Matzek, lead to 8th inning specialist Christ Martin. Those four guys all throw hard and deliver the Ks.
Braves starting lineup is a minefield for opposing pitchers. Ronald Acuna will lead off and play right field. This five tool player will one day very soon be a MVP candidate. Ozzie Albies will hit second and play 2B. When Tantor saw Albies in the minor leagues, “No way this little kid will ever make it in the majors”. Tantor has been proven very wrong. Great job to Albies for shutting up Tantor. NL MVP Freddie Freeman plays 1B and hits third. This is his final contract year and that usually means a MONSTER year. Welcome back Marcell Ozuna in RF. Ozuna resigned with the Braves, and he is just what this team needed. Ozuna had a great 2020 hitting behind Freeman and made the best third and fourth hitters in the NL. Hitting 5th and catching is Travis d’Arnoud. He is in a final year of his contract and needs to follow up a great 2020 with an even better 2021. Tantor is projecting 3B Austin Riley hitting 6th. Riley does not hit for average, but often hits it a long way. His defense is above average giving the Braves one of the best defensive infields in MLB. Fan favorite SS Dansby Swanson will hit 7th. The owner of the best hair in the world, Swanson is a clutch hitter and excellent fielder. He lost his arbitration case. Tantor is betting Swanson gets even against opposing pitchers. Hitting 8th will be another playoff hero CF Cristian Pache. Pache is officially a rookie in 2021. Curious to see what will happen when he goes through the inevitable rookie slump, but his excellent defense should carry him through.
Binge watching WandaVision leads to depression which is where the Braves bench exists. Organizational budget restrictions leads to one of the weakest benches in MLB. The bottom end of the bullpen consists of minor leaguers and a reclamation project, Carl Edwards. If Edwards saves his career, he will be a steal on a one year deal. The position player bench is just bad. The back-up catcher is a minor leaguer. Utility man Johan Camargo gained 30 lbs. two years ago and lost his swing. Fourth OF Ender Inciarte is only on the team because he is guaranteed $9 million in 2021. The final two bench spots are non-roster reclamation projects Jason Kipnis and Pablo Sandoval. Both of these guys bring experience but are at the end of their careers. Tantor is a Giant fan of the Panda and wishes both much success but little playing time.
The Braves do have a few minor leaguers that we should see later in the summer. Keep your eyes out for OF Drew Waters, C Shea Langeliers and INF Branden Shewmake. All will be Atlanta Braves eventually, but management will want to extend player control for another year.
The NL East may be MLBs toughest division in 2021. The Mets, Marlins and Phillies all made improvements. The Nationals may be healthy again, one day. There will not be one easy game in the NL East. The 2021 Central should be taken by the Cardinals while the West is a Clash of the Titans. San Diego Padres vs defending World Series Champion LA Dodgers. This should be a great summer of baseball.
by The Tantor               February 20, 2021 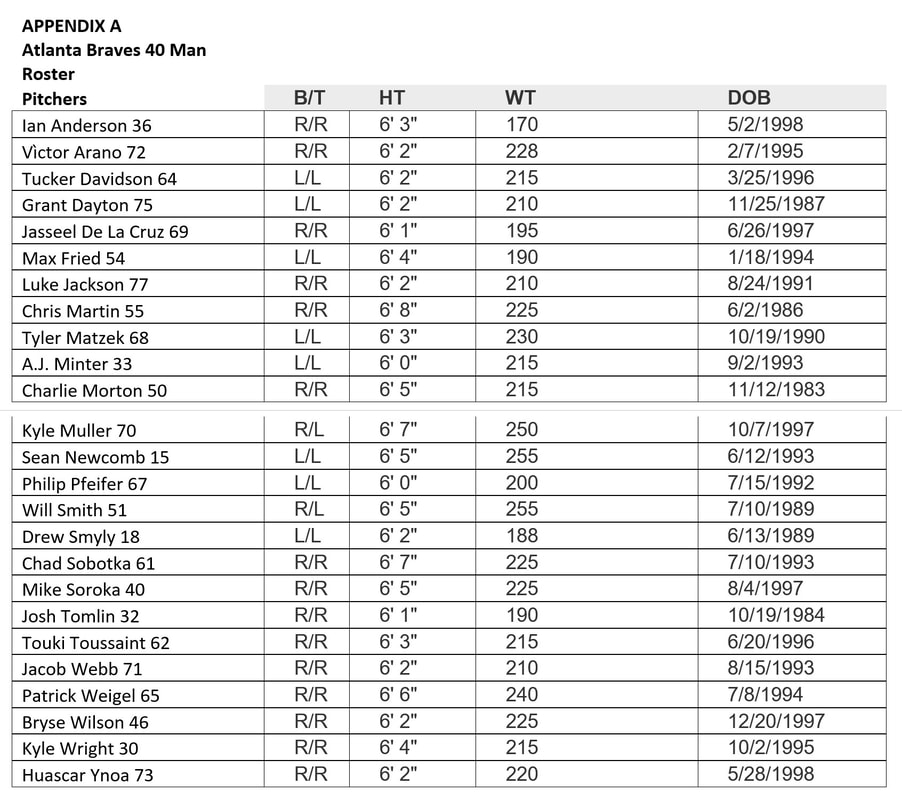 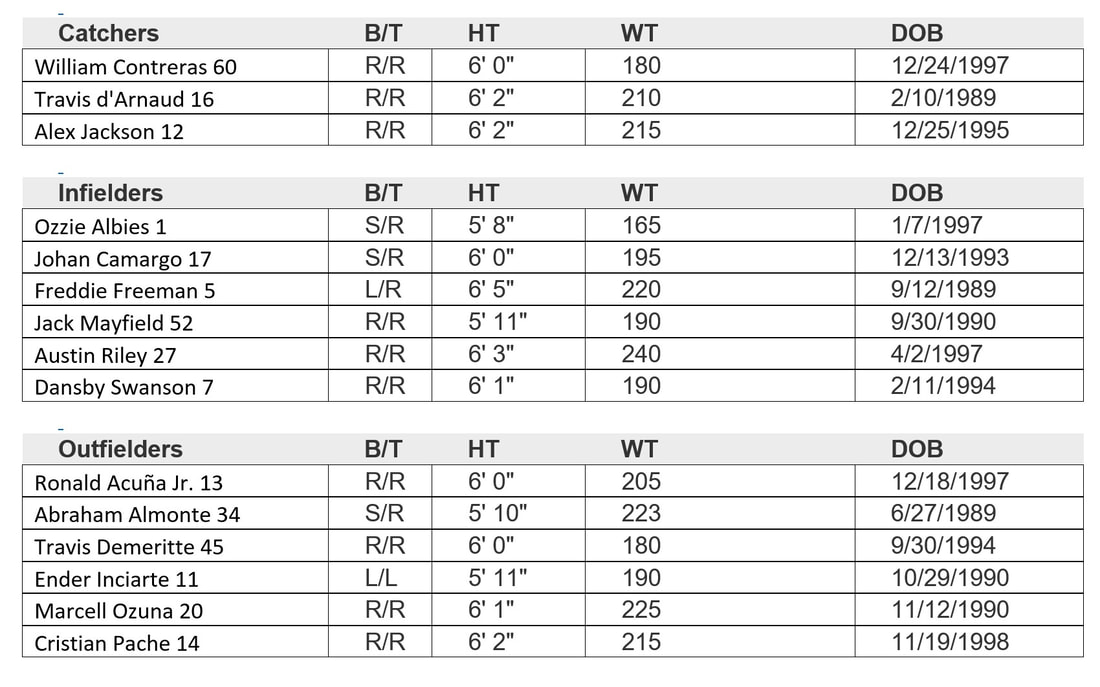 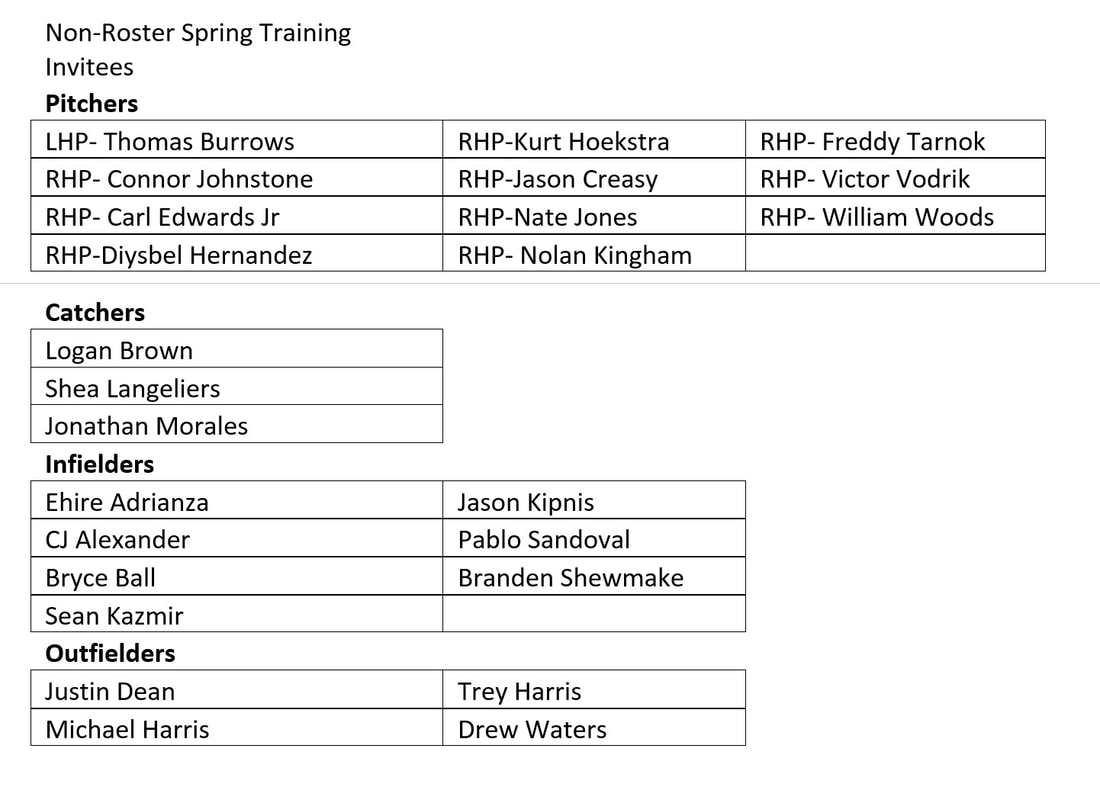 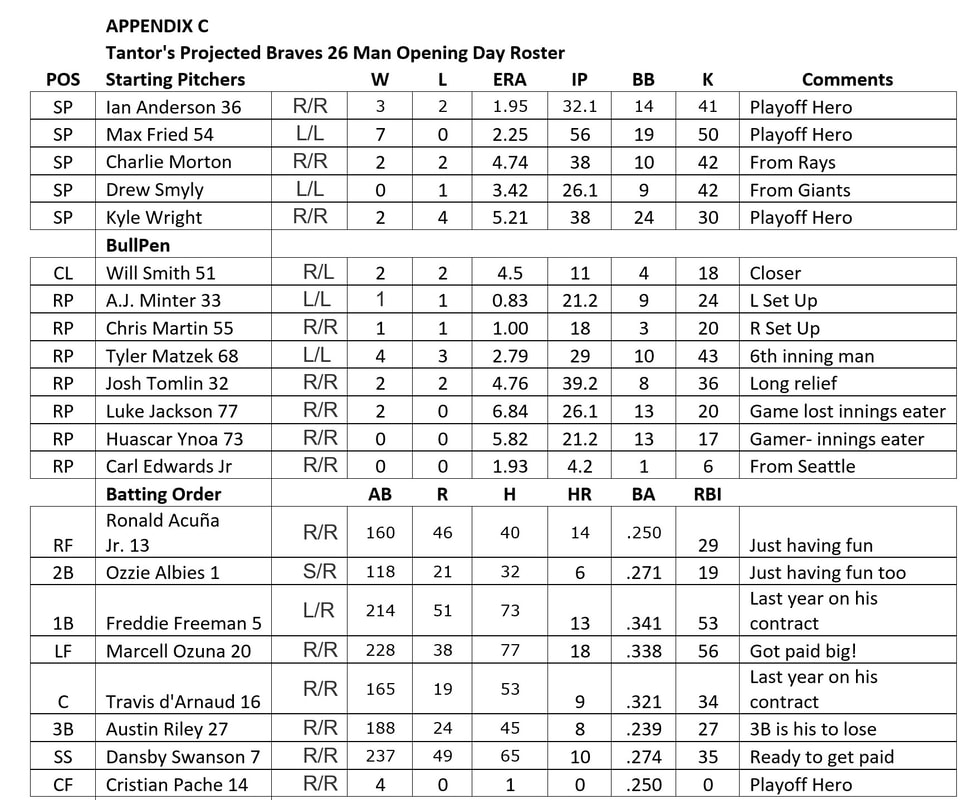