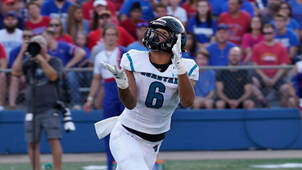 “None of our goals have been met.  Not a single person here can tell you that any of their goals have been met yet.”  Let that be clear, “None of our goals have been met.  Not a single person here can tell you that any of their goals have been met yet.”  This quote was given by Junior wide-receiver Jaivon Heiligh.
Coastal Carolina University’s football team has gone from an ESPN after thought when they opened the season at Kansas University (minus Rece Davis) to national spotlight.  Each and every week the spotlight has grown.
National broadcaster, ESPN analyst, and part-time WWE Superstar, Pat McAfee, and ESPN’s College Game Day host, Reece Davis, have now both experienced the power of the Teal Nation.  Each expressed ‘thanks’ as they were given Coastal Carolina gear, recognizing the Chanticleers on the national stage.
Now, the hype has hit platforms such as Bleacher Report and Twitter with the team’s most recent locker room celebration going viral – a reenactment of a WWE table match featuring Stone Cold Steve Austin (with over 550,300 views in less than 72 hours).
“We understand that we are on a national scale now, but we have to keep working hard and executing,” added Heiligh.  The standout wide receiver is in the top six in the three main categories for receivers in the Sun Belt Conference, receptions, yards, and touchdowns.
Through five games, Heiligh has 25 receptions for 434 yards and 4 touchdowns; and, in his two most recent games, he caught for over 100 yards against Georgia Southern and Louisiana.
The high scoring offense actually believes in ball control.  The Chanticleers are ranked fourth in the nation in time of possession (for teams that have played more than one game), controlling the ball approximately 56% of the game, while putting up over 38 points a game, ranking them nationally in the Top 25 in scoring.
“Our coaches have done a great job in technique and detail to everyone of us,” stated Heiligh.  The nation has noticed.  Last week the Chanticleers entered the polls for the first time ever in school history.  This week they moved up in greater ranking, climbing to 20th in the AP Poll and 21st in the Coach’s Poll.
“We’re just going to keep doing what we are doing and our defense is pretty great, too,” concluded Heiligh.
The schedule does not do any favors for Coastal Carolina as the boys in teal head to the 404 this weekend to take on the Sun Belt Conference’s highest scoring team, Georgia State.  Then they come home to Brooks Stadium to host the current leader in the Sun Belt Conference’s West Division, South Alabama.
If all goes well, the Chanticleers could have the entire national spotlight on them as classes break for Thanksgiving week.  On November 21st, Coastal Carolina hosts four time defending Sun Belt Champions, Appalachian State – possibly bringing Rece, Kirk Herbstreit, and the Game Day gang to Conway, SC... the ideal storyline climax to the Sun Belt Conference member in their 2020 season.
picture of Coastal Carolina Athletics