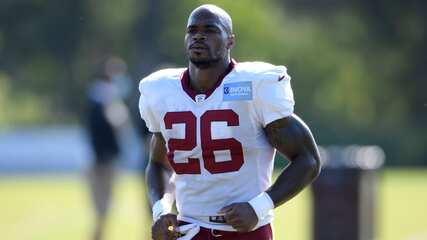 Welcome to the WORLD OF TANTOR. If you are new to the experience, Tantor apologizes. For this article will not be on my favorite subjects of MLS, WWE or blaming everything that is wrong in the world on Frank DeBoar. The Frank DeBoar material always ends up on the podcast cutting room floor. Rest assured, Tantor has proven that Frank DeBoar caused COVID, Social Injustice, World Hunger, Global Warming and boring soccer worldwide. Let’s not go down that rabbit hole, and stay focused on thanking Adrian Peterson for two great years with Washington.
The team in DC released Adrian Peterson today. Which was a surprise to both Tantor and Adrian Peterson. In an interview with Grant and Danny, Peterson stated he did not know he was getting released. He received a 7am phone call to meet with Coach Ron Rivera. Where he was informed that the team was going to go with the younger running backs. Peterson felt he had a great training camp working with the first team offense. He still thinks he has years left in the league and wants to play. Peterson was complementary of Coach Rivera and the rest of the coaching staff. He mentioned Antonio Gibson as being a talented back, and Bryce Love as progressing from his knee injury. Peterson is truly a class act. Thank you Adrian Peterson for being the only reason to watch the last two seasons.
Working behind patchwork offensive line in 2018 and 2019, Peterson managed very good stats.

He had over 1,000 yards in 2018 and came close in 2019 while never missing a game due to injury. Yes, he is 35 years old, but he never showed his age on the field. Some of his best runs were for 2 yards. Peterson would frequently be met by 3 unblocked defenders 4 yards deep in the backfield and manage to achieve a gain. Peterson still combines power with speed and an unbelievable first cut, often forcing defenders to make "business decisions”.
Washington made a business decision to release Peterson. Replacing him with two backs that have never touched a ball in a professional football game, Antonio Gibson and Bryce Love. They could be great, or a bust. The other two backs are Peyton Barber and J.D. McKissic.
Neither back has the stats to compare to Peterson. Barber’s yards per attempt in 2019 was 3.1. Which was the worst in the NFL for all RBs. Sorry for the bad news, but the WTF just became less talented.
As for Adrian Peterson, being released is the best thing for his career and health. Having to finish a Hall of Fame career on a terrible losing football team would be torture. He might not even survive behind arguably the worst offensive line in pro football. Let’s hope a contending winning organization picks up a veteran leader for their team.
Tantor thinks the best system fits would be in Seattle, Green Bay, San Francisco and Pittsburgh. The Packers are shifting to a run first approach and need a dominate personality to check their prima-donna QB. The Seahawks, 49ers and Steelers will all break your nose and black your eyes. The same thing Peterson does to DBs.
Good luck Adrian, all old Skins fans loved you.